The Iraq Moratorium And Incurious George 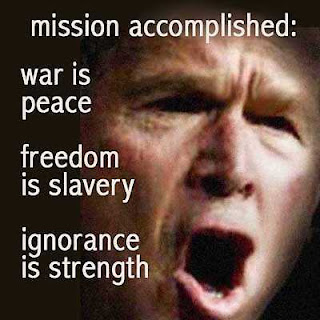 This is just a word about it from a Gold Star mom – whatever it takes, people.

And here is a column about you-know-who (we’re stuck with him for 486 more days as of now, barring impeachment – can’t expect much at all from this congress, but we can’t give up either)…

It took just eight decades but H.L. Mencken's astute prediction on the future course of American presidential politics and the electorate's taste in candidates came true:

On July 26, 1920, the acerbic and cranky scribe wrote in The Baltimore Sun: " . . . all the odds are on the man who is, intrinsically, the most devious and mediocre — the man who can most easily (and) adeptly disperse the notion that his mind is a virtual vacuum. The presidency tends, year by year, to go to such men. As democracy is perfected, the office represents, more closely, the inner soul of the people. We move toward a lofty ideal. On some great and glorious day, the plain folks of the land will reach their heart's desire at last, and the White House will be adorned by a downright moron."

My late good buddy Leon Daniel, a wire service legend for 40 years at United Press International, dredged up that Mencken quote several years ago and found that it was a perfect fit for George W. Bush, The Decider. MSNBC's Keith Olberman highlighted the same quote this week. A tip of the hat to both of them, and to Mencken.

The White House is now so adorned by Mencken's downright moron, and has been for more than six excruciatingly painful years. It wouldn't be so bad if the occupant had at least enough common sense to surround himself with smart, competent and honest advisers and listen to them. But he hasn't.

We inflicted George W. Bush on ourselves — with a little help from Republican spin-meisters, slippery lawyers, hanging chads and some judicial jiggery pokery — and he has stubbornly marched to the beat of his own broken drum year after year, piling up an unparalleled record of failures and disasters without equal in the nation's long history.

He inherited a balanced budget and a manageable national debt, and in just over six years has virtually bankrupted the United States of America and put us in hock to the tune of nine trillion dollars — a sum larger than that accumulated by all the 42 other presidents we had in two and a quarter centuries.

The man from Crawford, Texas, stood Robin Hood on his head almost from Day One, robbing the poor and the middle class so he could give to the rich and Republican. When the bills for those selective tax cuts, and his war of choice in Iraq, began coming due our president simply signed IOU's for a trillion dollars, with those markers now held by our traditional ally communist China.

Although he titillated the Republican conservative base with talk of his opposition to big government, Bush has presided over a far more grandiose expansion of government than even Franklin D. Roosevelt with his New Deal.

Faced with the tragedy of the 9-11 terror attacks — due in part to a dense and impenetrable federal bureaucracy which didn't know what it knew and wouldn't have shared it if it had known — the president created a far denser, far less efficient and far more expensive mega-bureaucracy, the Department of Homeland Security.

Having made one good move, attacking and toppling the Taliban and running al Qaida and Osama bin Laden out of Afghanistan in retaliation for 9-11, the president and his crowd then turned away, half-finished with Job One, and decided to "pre-emptively invade" Iraq, which had precisely nothing to do with the attacks on America.

In one stroke of George W. Bush's pen America went from being a nation that distrusted foreign entanglements and fought wars only when grossly provoked to a nation that attacked first and without credible reason.

That same stroke — and the ensuing five years of war in Iraq — wiped out whatever remained of our reservoir of good will with the rest of the world. The shining city on the hill donned camouflage paint and went to war in the wrong place at the wrong time against the wrong people.

Now George Bush could posture and strut as a wartime president; could style himself The Decider, and could decide which parts of the Constitution and Bill of Rights bought so dearly by generations of Americans he would give or take away.

The mills of the military-industrial complex went into high gear, as the defense contractors jostled for their places at a trough filled each year with half a trillion dollars of taxpayer money. The Republican political operatives milked them all like so many Holstein cows and the Republican lobbyists romped over to Capitol Hill buying congressmen by the baker's dozen to keep the pumps primed.

When one raison du jour for the war in Iraq failed — and all have failed — President Bush and his general-of-the-month could always come up with another to appease the gods of war and keep the machinery turning.

Throughout this ongoing national catastrophe Bush has kept close around him a coterie of incompetents and ideologues always on guard to defend the indefensible and justify the unjustifiable. They brush the lapels of the emperor's suit of gold and whisper that he is right and God will make him shine in American history.

Perhaps the crowning blow came when it was revealed that The Decider is now getting his strategic advice and counsel from none other than Henry Kissinger, the author of genocide in Cambodia; wholesale slaughter in Chile; abandonment of American POWs in Laos; betrayal of South Vietnam, and recipient of the Nobel Peace Prize.

And by the way, regarding this story, Dubya, try listening to Sen. Charles Grassley (assuming a pine cone like you has enough of a brain to process the information he’s trying to communicate).

And finally, here’s a reminder about why all of this matters.